More level crossings to go on the Frankston line

Three dangerous level crossings will soon be gone and two new stations built at Cheltenham and Mentone to improve services on the Frankston line.
The stations were closed on 20 March to mark the commencement of construction works, with the new stations due to open in the middle of 2020.
While these works take place, trains are running express through Cheltenham and Mentone, and shuttle buses are operating between Southland and Parkdale stations.
Minister for Transport Infrastructure Jacinta Allan said “we’re continuing work on these projects despite the COVID-19 outbreak – providing certainty to local workers and making progress on delivering a better train network for Victorians.”
“These level crossings are dangerous and unsafe – we’re getting rid of them, like we promised, as well as delivering new stations for Cheltenham and Mentone, with more open space for the community to enjoy,” Minister Allan said.
During a major Frankston line construction blitz, which starts on 24 May and runs for eight weeks, the rail trenches will be dug out and new stations built.
Buses will replace trains between Moorabbin and Mordialloc during this time.
The new Mentone Station will open when trains resume on the Frankston line in mid-July, and Cheltenham Station will follow in August.
Along the Frankston line, the Victorian Government is spending $3 billion to remove 18 level crossings and building 12 new stations. 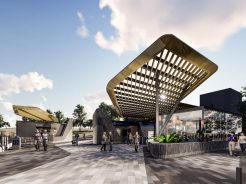