Metro is using drone technology and a custom-built CCTV trailer to keep a close eye on trains moving in and out of Flemington during the Melbourne Cup Carnival.

Two new drones will be Metro’s eyes in the sky as more than 1,000 additional services help racegoers get to and from the festivities safely and reliably. The new mobile CCTV trailer, complete with thermal night-time imaging to target vandals and trespassers, is also being used along the Flemington Racecourse line.

The trailer includes a six-metre mast, which carries a zoomable camera as well as a thermal imaging camera, providing clear vision at night or in areas with little or no light. Both technologies will help reduce the impact of train and track faults across the network, getting trains and racegoers moving as quickly as possible. 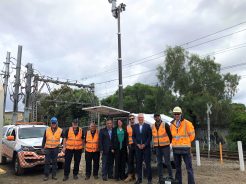 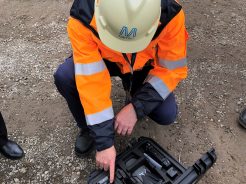 The drones, which can be called upon at a moment’s notice, will give Metro Trains’ Control Centre staff the best view of the train network, complementing the 9,000 CCTV cameras already in place across Melbourne.

This is the first time Metro Trains will use its own drone technology with 10 specially trained pilots working across the four race days. The vision will be monitored by Victoria Police and Metro Trains security staff who will be able to act quickly if there is an infrastructure issue or security incident on the track.

Metro Business Resilience Manager Brendan Connors said the air support is improving situational awareness during one of the busiest periods on the rail network. “The drones can operate in hard to access locations, and through a live feed, will be able to give our control centre staff the best view of the train network,” Mr Connors said.