Be safe and ‘Check Yourself Around Trains’

A new Metro campaign is taking aim at risky behaviour around trains to prevent injuries, improve service reliability, and get passengers home safer and sooner.
Using a series of creative animations, the Check Yourself Around Trains campaign focuses on preventing unsafe incidents that can injure passengers and cause avoidable delays – such as people holding open train doors and rushing on platforms.
The campaign also calls on passengers to be courteous to fellow train users by moving down carriages and removing backpacks.
Metro CEO Raymond O’Flaherty said “small changes in behaviour around trains can make a huge difference to the experience of all passengers who rely on our network every day.”
In the past 12 months, there have been more than 1,000 avoidable slips, trips and falls across the network, many of which have required medical assistance and delayed trains on platforms.
A further 176 safety incidents over the same period involved passengers forcing open train doors and risking serious injury to themselves and others.

Delaying a single train by a matter of seconds at each station can compound into several minutes by the end of the line – holding up passengers on every service behind it.
“We ask that people consider their own safety at all times, avoid forcing open train doors, and be courteous to fellow passengers during their journey,” Mr O’Flaherty said.
In January, Metro services were disrupted by an industrial dispute causing driver resourcing issues, as well as extreme heat and lightning strikes that delayed trains and affected rail equipment.
More than 1,000 services were delayed due to passenger behaviour and congestion, a reduction compared to the previous month with the new campaign to continue to reach commuters on their digital devices when near and at stations across the network.
Metro delivered 98.0 per cent of scheduled services with 91 per cent running on time in January. Had the driver dispute in late January not occurred, Metro would have met its performance targets.
Factors impacting performance across the month included:

Throughout January, Metro moved 114,000 people on an additional 270 services to special events across Melbourne including Big Bash League cricket matches.

More than 1.6 million passengers were moved on replacement buses over 25 days while major works made significant progress on the Metro Tunnel. 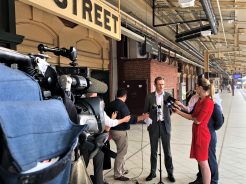 Metro CEO Raymond O’Flaherty addresses media at the launch of the campaign.
Share
Copy to clipboard
Done
Back to top
Your trips